VERSION 4.1 UPDATE: Learn about the new data and features or start exploring

This page contains a dynamic scatterplot which will load new data as you proceed though the page. These updates will be announced in accordance to your screen reader's implementation of aria-region live.

Racial and ethnic disparities in children’s academic performance are a stubborn feature of the American educational landscape.

Though these gaps are substantially smaller than they were 40 years ago, they remain quite large: the difference in standardized test scores between White and Black students amounts to roughly two years of schooling. The gap between White and Hispanic students is almost as large. 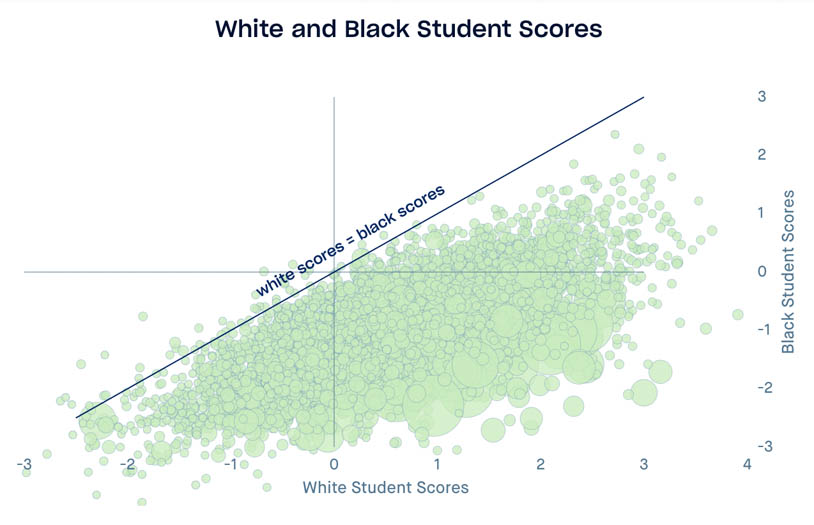 The first figure compares the average performance of Black and White students. Each circle is a school district, and the size of the circle is proportional to the number of Black and White children enrolled in the school district. Districts that lie on the diagonal line have no White/Black disparity in test scores, and the farther a district sits away from the diagonal line, the greater the gap in that district. 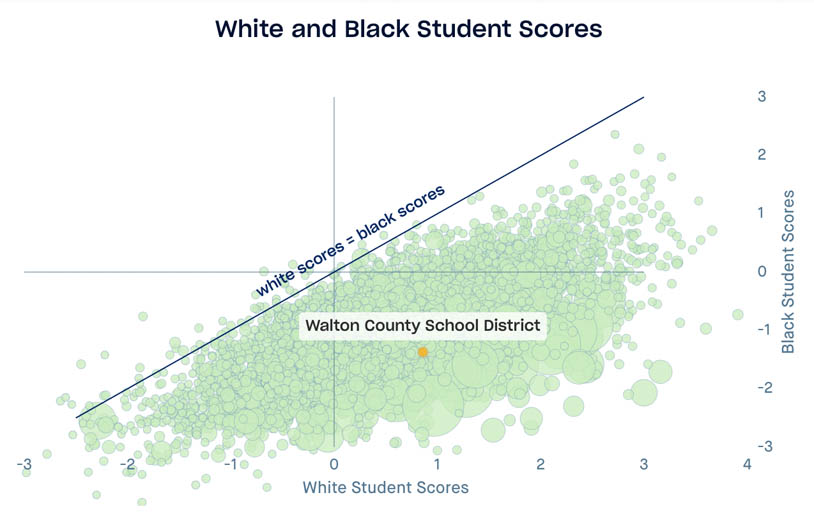 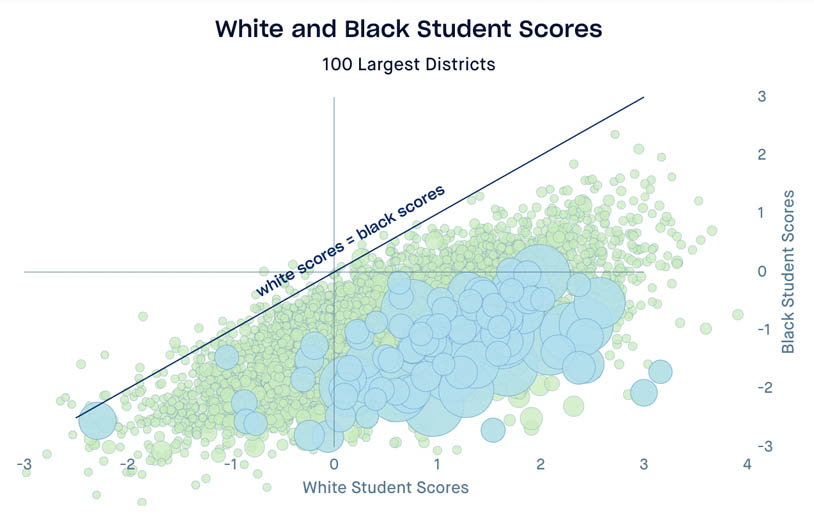 Consider the nation’s 100 largest school districts (collectively, these 100 districts serve over 2.5 million Black and 2.5 million White students). Almost all of these districts fall well below the diagonal line on the chart, indicating large achievement gaps. In almost all of these districts, Black students’ scores are below—generally far below—the national average. In contrast, in most of the districts, White students scores are above the national average. In fact, there is no large school district in the United States where Black students are both performing moderately well and are on par with White students.

It is common to assume that these gaps have a straightforward explanation: White students tend to live in wealthier communities, where schools often have more resources and are presumed to be better. The data, though, do not support this argument. In general, gaps in academic performance are quite large when children enter school in kindergarten, a pattern we can’t blame on schools. Moreover, the gaps grow relatively little while children are in school, which is not what we’d expect if schools were primarily responsible.

One reason schools are blamed is a common, but fundamental, error in interpreting test score data. Low average test scores do not mean that schools are at fault. (See our Discovery article, “Affluent Schools Are Not Always the Best Schools” to understand how school effectiveness can be measured.) Think about how students’ academic skills and capacities develop. A child’s early experiences—at home, in child care and preschool, in their neighborhoods, and with their peers—provide opportunities to develop socioemotional and academic capacities. Average test scores of students reflect all of these experiences, and so it is better to think of them as a measure of the total set of educational opportunities children have had. Gaps in average test scores, therefore, represent gaps in educational opportunity.

The data show enormous variation in the size of opportunity gaps. Consider 3 school districts in the Atlanta metropolitan area. 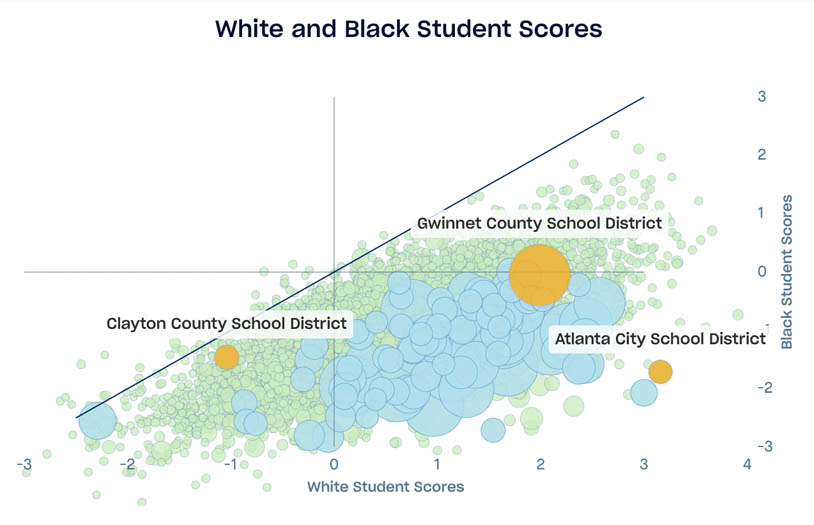 In Clayton Co., just south of Atlanta, the gap is small, but that’s because both White and Black students score well below average. Both groups experience quite low levels of educational opportunity.

Northeast of Atlanta, in Gwinett Co, the patterns are better in some ways—both White and Black students score higher than in Clayton Co. But the news is not all good: the White/Black gap is much larger here, about 2 grade levels. The high level of educational opportunity in Gwinett County are not equally available to its Black and White children. 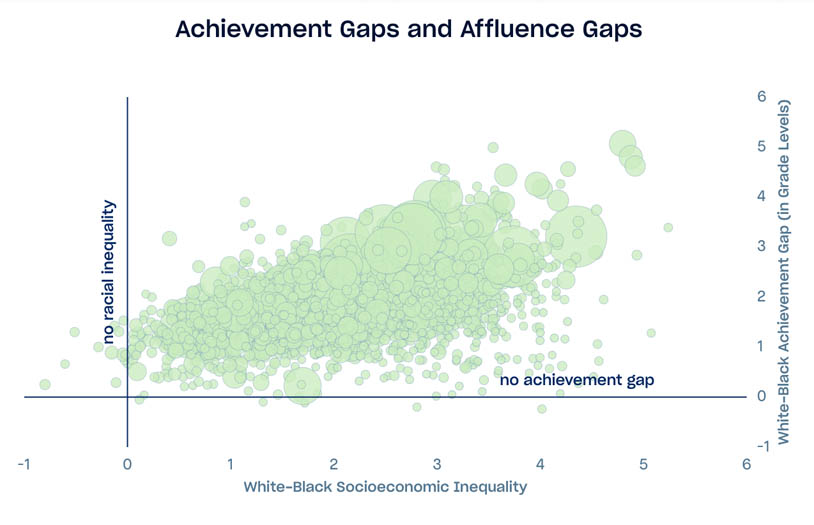 In this figure, circles to the right of the line indicate that White families in the district have higher socioeconomic status, on average, than Black families. (Circles to the left—of which there are very few—indicate the opposite.) The higher the circle, the larger the gap in achievement between a district’s White and Black students. 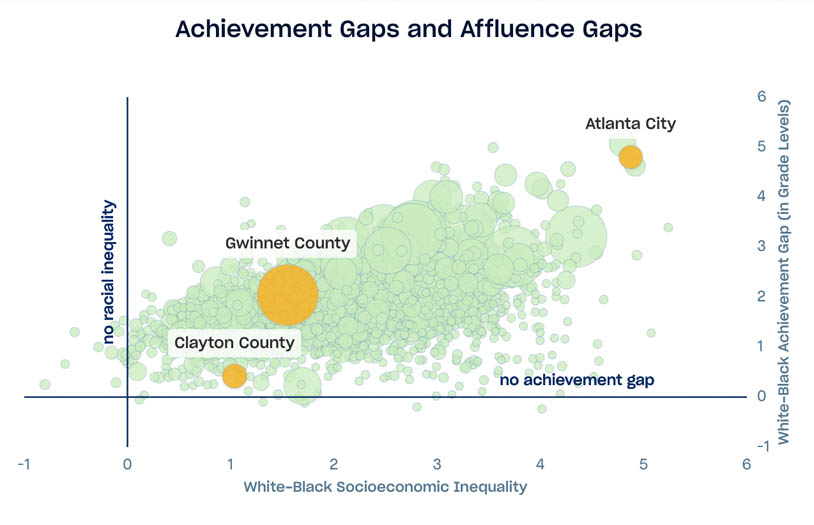 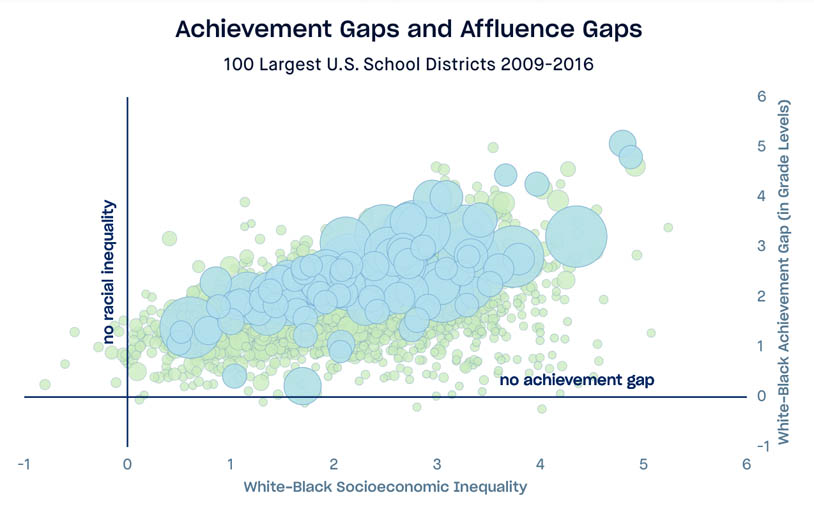 This pattern is evident more generally among the 100 largest districts, where those with larger differences in socioeconomic status between White and Black families tend to have more substantial racial gaps in achievement. And in almost all districts, White children come from more economically advantaged families than their Black schoolmates, a factor which contributes significantly to the White-Black opportunity gap. 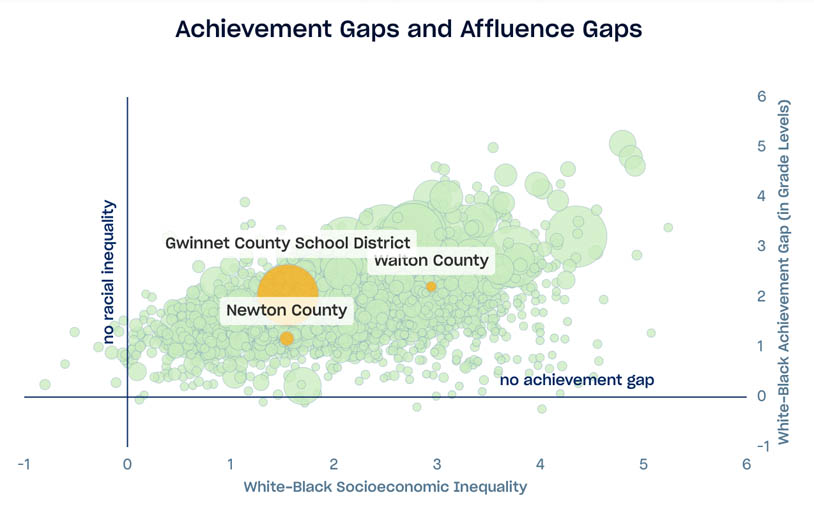 So what other factors contribute to unequal opportunity? Our research suggests that the most important predictor of achievement gaps is school segregation. This is readily evident in the data. 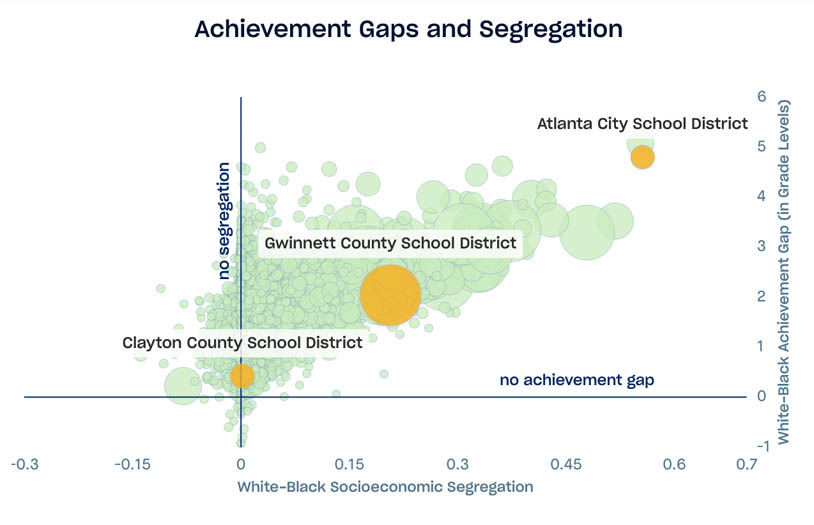 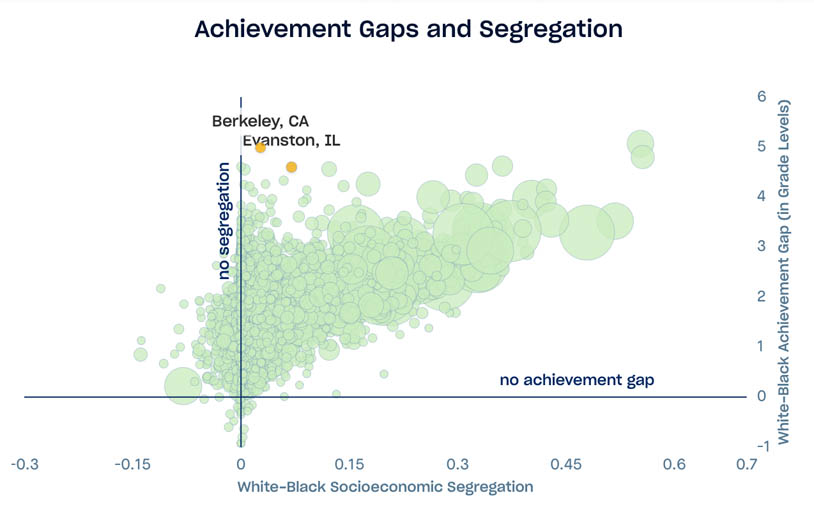 Moreover, among the several thousand school districts in the US with more than a handful of Black students, there is no moderately or highly segregated district with a small achievement gap. It is possible to have a large achievement gap in the absence of segregation (as in Berkeley, CA and Evanston, IL), but segregation appears to be tightly linked to inequality in educational opportunity. If it is possible to provide equal educational opportunity under conditions of segregation, no community in the U.S. has discovered the way. Racial segregation, which has limited the opportunities of Black children and families for generations, continues to limit them today.