Learn about the data, and how to use our interactive visualizations. 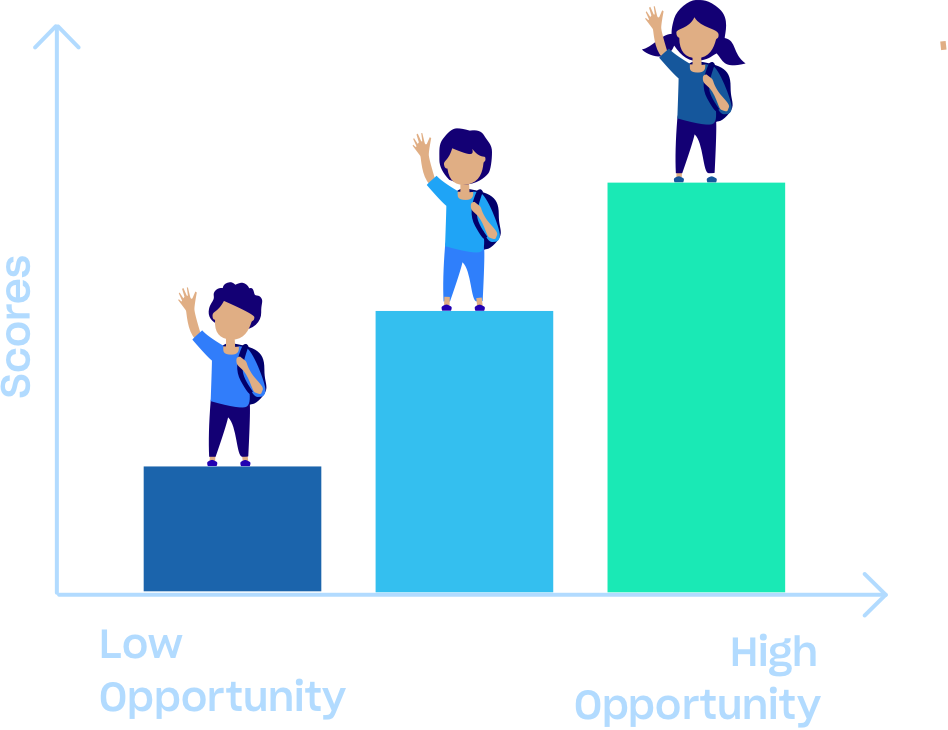 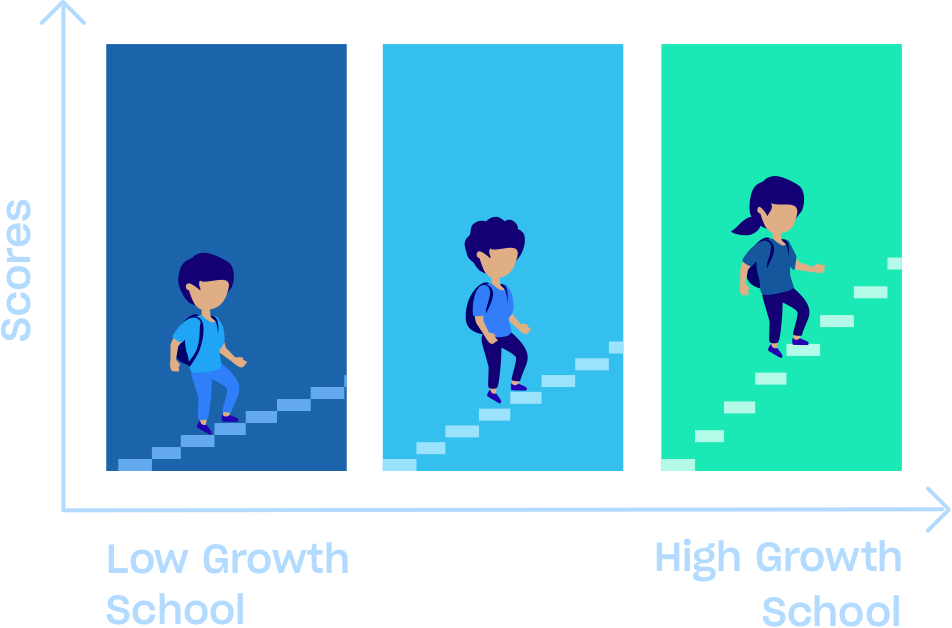 The learning rate indicates approximately how much students learn in each grade in a school, district, or county. Because most educational opportunities in grades 3–8 are provided by schools, the average learning rate largely reflects school quality. 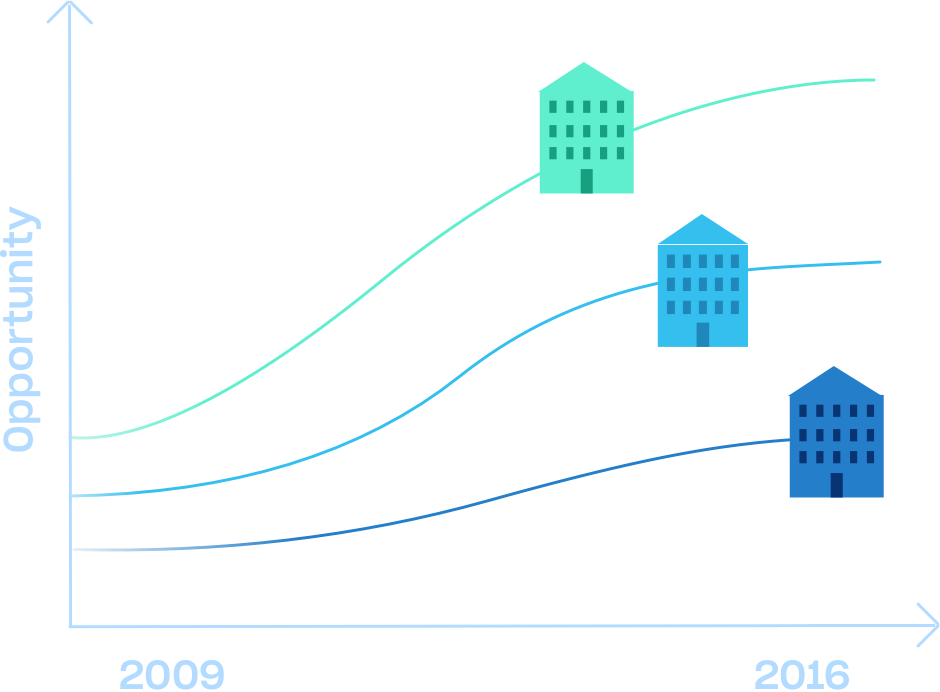 The trend in scores indicates how rapidly average test scores within a school, district, or county have changed over time. It reflects changes over time in the total set of educational opportunities (in and out of schools) available to children. For example, average scores might improve over time because the schools are improving and/or because more high-income families have moved into the community.

A child’s educational opportunities include all experiences that contribute to learning the skills assessed on standardized tests. These include opportunities both in early childhood and during the schooling years, and experiences in homes, in neighborhoods, in child-care and preschool programs, with peers, and in schools.

Socioeconomic status. The FAQ section describes the variables used to measure the average socioeconomic composition of families in each community, both overall and for different groups within a community.

The average, or “mean,” is used to represent the typical or central value in a set of numbers.

A standardized test used to measure the knowledge and skills a student has attained in a particular subject, after instruction.

The numeric score earned on an achievement test.

A description of what test-takers earning scores in a particular range are expected to know and/or are able to do. Each achievement test usually has three to five achievement levels defined. Achievement levels often have labels describing performance relative to grade-level expectations, such as “basic,” “proficient,” or “advanced.”

The test scores, or boundaries, that separate a set of achievement levels.

A data set containing information about how many students in each group (where groups could be schools, districts, states, etc.) earned scores in each achievement level.

The percentage of students whose test scores were at or above the “proficient” achievement level in a given grade.

A set of statistical methods used to facilitate comparisons across different tests.

The National Assessment of Educational Progress.

The heteroskedastic ordered probit model is a statistical technique that can be used to analyze proficiency data.

Where do the test score data come from? What years, grades, and subjects are used?

The data are based on the standardized accountability tests in math and Reading Language Arts (RLA) administered annually by each state to all public-school students in grades 3–8 from 2008–09 through 2017–18. In these years, 3rd through 8th graders in U.S. public schools took roughly 450 million standardized math and RLA tests. Their scores—provided to us in aggregated form by the U.S. Department of Education—are the basis of the data reported here.

We combine information on the test scores in each school, school district, county, or state with information from the National Assessment of Educational Progress (NAEP; see https://nces.ed.gov/nationsreportcard/about/) to compare scores from state tests on a common national scale (see the Methods page).

What are ‘educational opportunities’?

Educational opportunities include all experiences that help a child learn the skills assessed on standardized tests. These include opportunities both in early childhood and during the schooling years, and experiences in homes, in neighborhoods, in child-care and preschool programs, with peers, and in schools.

For more information see our interactive feature article, “Affluent Schools Are Not Always the Best Schools."

What do average test scores tell us?

To understand the role of educational opportunities in shaping average test-score patterns, it is necessary to distinguish between individual scores and average scores in a given school, district, or county.

Why are there three different summaries of test scores (average scores, learning rates, and trends in scores) in each place? What can we learn from each of these?

For more information on how the average, learning rate, and trend in test scores are computed, see the Methods overview.

What schools are included in the data?

All public schools—traditional, charter, and magnet schools—that serve students in any grade from 3 through 8 are included in the data.

We do not use or report test scores from virtual schools.

In most states, students in private schools do not take the annual state accountability tests that we use to build SEDA. Therefore, no test scores from private schools are included in the raw or public data.

Schools in Puerto Rico are included in the SEDA 4.0 and 4.1 data. Specifically, we include estimates based on math tests taken by students in Puerto Rico public schools in the years 2010-11 through 2017-18.

Schools run by the Bureau of Indian Education (BIE) are included in the SEDA 4.1 data. Specifically, we include estimates based on reading and math tests taken by students in BIE schools in the years 2008-09 through 2011-12, and in 2015-16 and 2016-17. The BIE did not report test score data for other years to EDFacts.

How accurate are the data? What should I do if I find an error in the data?

We have taken a number of steps to ensure the accuracy of the data reported here. The statistical and psychometric methods underlying the data we report are published in peer-reviewed journals and described on the Methods page and in the technical documentation.

Nonetheless, there may still be errors in the data files that we have not yet identified. If you believe you have found an error in the data, we would appreciate knowing about it. Please contact our SEDA support team at sedasupport@stanford.edu.

Are these data available for researchers or others to use?

Yes. These data are available for researchers to use under the terms of our data use agreement. You can download the data files and full technical documentation on our Get the Data page.

Are the test-score measures (average scores, learning rates, and trends) adjusted to take into account differences in student demographic characteristics or any other student or school variables?

On the website, we note schools that serve exceptional student populations (large proportions of students with disabilities, students enrolled in gifted/talented programs, or students with limited English proficiency). These students’ characteristics should be taken into consideration when interpreting the test-score data and comparing performance to that of public schools serving more general populations.

The downloadable SEDA data files include student, community, school, and district characteristics that researchers and others can use.

How is socioeconomic status measured?

For each school district or county, we use data from the Census Bureau’s American Community Survey (ACS) to create estimates of the average socioeconomic status (SES) of families. Every year, the ACS surveys families in each community in the U.S. We use six community characteristics reported in 5-year rolling surveys from 2005-2009 through 2014-2018 to construct a composite measure of SES in each community:

The composite SES measure is standardized so that a value of 0 represents the SES of the average school district in the U.S. Approximately two-thirds of districts have SES values between -1 and +1, and approximately 95% have SES values between -2 and +2 (so values larger than 2 or smaller than -2 represent communities with very high or very low average socioeconomic status, respectively). In some places we cannot calculate a reliable measure of socioeconomic status, because the ACS samples are too small; in these cases, no value for SES is reported. For more detailed information, please see the technical documentation.

What does the gap in school poverty measure?

What does the gap in percent minority students in schools measure?

For these calculations, we define the percent of minority students as the percent of students in a school who are Black, Hispanic, or Native American. On average, these racial/ethnic groups have had limited educational opportunities due to low socioeconomic resources, historical societal discrimination, and the structure of American schooling; these limited educational opportunities have led to low average achievement on standardized tests. We do not include Asian students in the definition of this measure because Asian students tend to have higher socioeconomic status than White and other racial/ethnic groups; that is, Asian families are not, on average, socioeconomically disadvantaged relative to White families in the U.S.

There are multiple limitations to this definition of minority. First, we recognize that by grouping Black, Hispanic, and Native American students, we are not able to observe differences in average educational experiences of students belonging to the different racial/ethnic groups. Second, the exclusion of Asian students from this measure based on their average performance does not account for the diversity of the Asian subpopulations. Moreover, it is important to acknowledge that Asian families have been discriminated against socially and economically within the U.S., and this discrimination likely affects their educational experiences.

For SEDA, we report measures of differences in minority composition because this has long been the conventional way of thinking about segregation. However, our data shows that this measure is not predictive of unequal opportunity once we take into account differential school poverty composition.

Why are the data here different from the results reported by my state?

States typically report test scores in terms of percentages of proficient students. They may also report data only for a single year and grade or may average the percentages of proficient students across grades. Measures based on the percentage of proficiency are generally not comparable across states, grades, or test subjects, and are often not comparable across years because of differences in the tests administered and differences in states’ definitions of “proficiency.” See the Methods page for more details.

States often provide school grades or other school scores as an index. These may take a number of factors into account, not just test scores. This makes them very difficult to compare across states and grades and over time.

In contrast, the test-score measures we report here are based on more detailed information about students’ test scores. They are also adjusted to account for differences in tests and proficiency standards across states, years, and grades.

Why are there no data for my school or district?

There are several reasons that SEDA may not contain data for a school, district, or county:

Why does is my school or district flagged as missing data for recent years (2016-2018)?

If a school or district is flagged (see image below) as missing more than 50% of test score data for recent years (2016-2018), this means that estimates are based on older data (before 2016). Why? Less data were reported between 2016-2018 due to state test opt out which began in the Spring of 2015. Reasons for opt out vary and the number of parents opting students out of taking state assessments also vary year-to-year. To learn more about opt out policies for students in your area, we recommend that you visit your local school, district, or state website.

How can I learn more?

The Discoveries pages provide guidance on interpreting the data, the Glossary section and Methods page provide an overview of the process used to construct these data, and the technical documentation provides full methodological details along with reference for further reading.

How can I get help using the Educational Opportunity Explorer?

The Educational Opportunity Explorer offers a FAQ within the Explorer itself. Press the HELP button to get answers to your questions on using the Explorer and interpreting its map and charts.

If your questions are not answered there, please reach out to help@edopportunity.org for questions on how to use the Educational Opportunity Explorer and website.